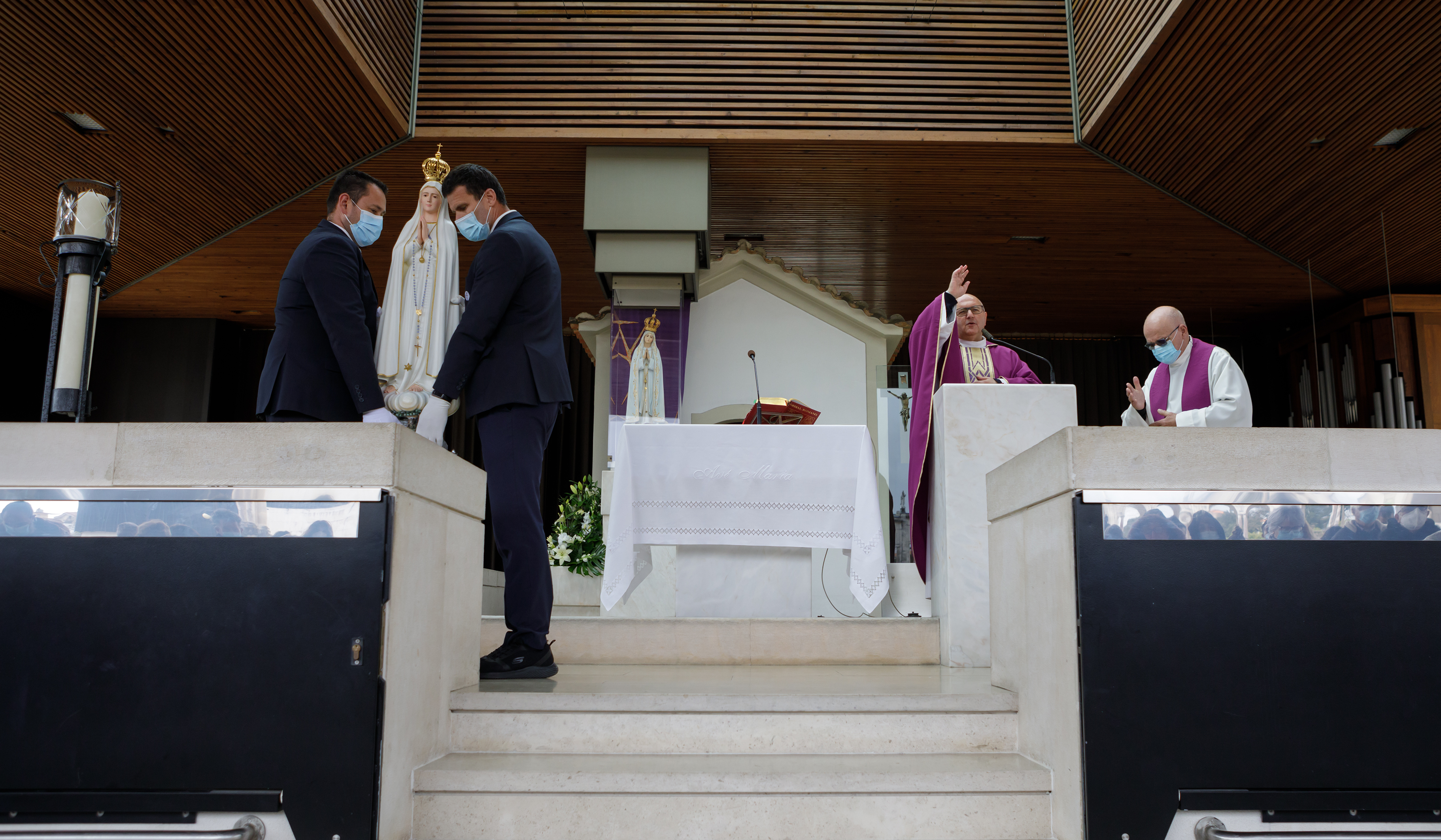 Image No. 13 of the Pilgrim Virgin of Fatima Goes to Ukraine as “Messenger of Peace”

This trip answers a formal request from the Archbishop and Metropolitan of the Greek-Catholic Church of Lviv, Ihor Vozniak

The Chapel of the Apparitions hosted, this morning, the celebration of the departure of the Image No. 13 of the Pilgrim Virgin of Fatima to Ukraine, in response to the request of the Greek-Catholic Archbishop of Lviv.

Attending the ceremony, Father Joaquim Ganhão, Director of the Department of Liturgy of the Shrine of Fatima, recalled the “call, raised by this time of Lent, which challenges us every day: convert, change your mentality, learn that art of loving which you find in your God”.

Father Joaquim Ganhão also considered that “there is no other way, if not the way of overflowing love to the end, that love that God poured into us and incarnated in us, today, in this concrete circumstance of our life and our history.”

“We must open the doors, and recognize that the other is not our enemy, is not our rival, but is our brother, with whom we must build history, build peace, and it is a demanding work,” he reiterated.

“We are facing a war that involves all of us, and here in Cova da Iria, let us entrust ourselves to the Mother of Mercy and Queen of Peace, let us pray for our brothers who suffer most, let us pray for an end to the war in Ukraine and everywhere else, let us pray for so many innocent victims,” he said moments before proceeding to the sending forth prayer, at a time when prayers are said in a particular way for peace in the East.

The Metropolitan of Lviv, Ihor Vozniak, made a formal request to the Shrine of Fatima on March 10, asking that the Pilgrim Virgin Image of Fatima be sent to Ukraine “so that we can pray, asking for her protection so that peace may return to the country”.

The Image, which will remain in Ukraine for a month, will depart from Lisbon to Warsaw, Poland, where it will be welcomed and transported by the Greek-Catholic community of Lviv.

Image No. 13 is a replica of Image No. 1, designed and conceived according to the instructions of the Servant of God, Sister Lucia of Jesus, and solemnly crowned by the Archbishop of Evora on May 13, 1947.

“The Pilgrim Virgin goes to meet the communities, echoing the Message that Our Lady left us here, from the first hour; and, at the present moment, it is undoubtedly a very important journey, as a messenger of Peace, and as a mother who invites her children to peace,” the priest said in a statement to the media at the end of the celebration.

Since 1947, the different Images of the Pilgrim Virgin of Fatima have travelled throughout the world, carrying with them a message of peace and love. There are no more than thirteen Images of the Pilgrim Virgin, the number one being enthroned in the Basilica of Our Lady of the Rosary of Fatima, since 2003, having been moved only in absolutely exceptional situations, the last of which was to Panama, in January 2019, to participate in World Youth Day, in the presence of Pope Francis.

From her first departure to the present day, regardless of which of the statue of the Pilgrim Virgin was sent, extraordinary reports come to the Shrine from all sides, of crowds that flock to its passage, of participation never before seen in the various celebrations, of a great number of penitents who approach the sacrament of reconciliation, of the affluence of all kinds of people: children, young people, adults and the elderly, from different social backgrounds and even different religious confessions; in short, reports of significant pastoral fruits and abundant graces achieved.

Since February 21, at the request of Cardinal D. António Marto, a daily prayer chain has been established from Fatima, asking for the return of peace to the country which is experiencing moments of great suffering. Besides praying the Rosary, thus fulfilling the call of Our Lady of the Rosary to the three little shepherds to pray the Rosary every day for peace, a daily appeal is included in the prayer of the faithful in all the Masses of the official program of the Shrine.

Mass, in Portuguese, in the Basilica of Our Lady of the Rosary of Fatima

Rosary, in the Chapel of the Apparitions

The usage of the contents in this gallery is subject to licensing. Please contact the Audiovisual Centre of the Archives of the Shrine of Fatima by email: [email protected].


Please, complete the payment on your app MBWAY (this operation may take a few minutes to be available).

The receipt issued by the machine serves as proof of payment.
Keep it.